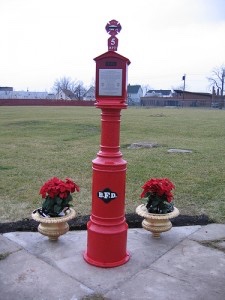 At 20:23 hours, December 27 1983, the Buffalo (NY) Fire Department responded to a reported propane leak in a four-story radiator warehouse located to the corner of North Division and Grosvenor streets. This building was a combination of Type III ordinary and Type IV heavy timber construction that was approximately 50 feet x 100 feet. Engine 32 was the first to arrive on scene and reported nothing showing. Shortly after Truck 5, Engine 1, and the Third Battalion arrived. Battalion Chief Supple assumed incident command.

Thirty-seven seconds after the chief announced his arrival, the propane tank detonated. The explosion leveled the four-story building and demolished other structures within a four-block radius. Seriously damaged buildings were noted over a half a mile away. The ensuing fireball started buildings burning on a number of streets. A large gothic church on the next block had a huge section ripped out. A ten-story housing project several hundred feet away had every window broken. Engine 32 and Truck 5’s firehouse, which was a half mile away from the explosion, had all its windows shattered.

The force of the blast threw Ladder 5, an aerial tiller, nearly 35 feet into the front yard of a dwelling, instantly killing all five crew members (firefighters Mike Austin, Mickey Catanzaro, Red Lickfeld, Tony Waszkielewicz, and Matty Colpoys). Two civilians, Alfred and Jessie Arnold, were also killed as they sat in their living room of their home, which neighbored the warehouse. Engine 1 was thrown across the street, injuring the captain and driver inside the cab and pinning them inside among burning debris. Engine 32 was slammed against the warehouse, and buried in rubble. Eleven firefighters were injured in the initial blast, several of them critically. During the rescue efforts, 19 more firefighters were injured as a result of the adverse weather conditions. Over 150 civilians were transported to hospitals for injuries suffered in the explosion and many more were treated at the scene.

There is now a memorial at fire call box 191 at the intersection of where the tragedy occurred. Each year on December 27, at 2020 hrs, the Fire Department rings out the alarm 1-9-1 to honor the five firefighters of Ladder 5.

The gear of a typical firefighter is 45#.

1000 step ups for time, 55# ruck Hated every step. Lost count at least four or five times. Pants were a bad choice. Not having a drink was a bad choice. The music I put on sucked. I wanted to quit over 100 times. I fought against myself “accidentally” miscounting numerous times. It’s not the fastest but I did it. Not doing it would have been much easier. I was alone in my backyard, no one would know. I would. No one would question it if I said I did it in X time but then when it came time to put up I know I would be less than I said I would be. No one would know but everyone would know. There is the phrase that stress or battle do not create character they reveal it. If I do not live up to the task, the standard then I have no business ever asking anyone else to do the same. I am the standard, I am the standard that I wish for others to live up to. I cannot expect anything more than that. Therefore I am a firm believer that I should never ask athletes to do anything I haven’t done, will not do, or wouldn’t attempt to do. Our needs differ by degree not by kind. Today was a mental battle! #pumpday #chad #goruck #fitfam #cfqda #buffalony #sunshine #skeletor #humpday
Many people ask how I am doing. It’s another bump in the road. It’s another obstacle to prove how much I want something. It’s another evolution to get through. I have opportunities to quit almost everyday, excuses to get out, reasons to fail. They are infinite as grains of sand. Those reasons to quit do not matter because my reasons to keep going are that much stronger, they are powerful beyond measure. Quitting and giving up have never crossed my mind. It’s not even a possibility. I will find a way, always. I’m not the best, I’m not the smartest, I’m not the strongest, but you will be hard pressed to find someone willing to go as long as me. To give everything and find more. So, how am I doing? I’m helping people everyday near and far. That’s my passion and I’m grateful I can do it. I’m learning to work in new ways and help people in ways I never knew I could. It isn’t what I was ever expecting but I’m making the most of it and when we are back in full effect we will be stronger, better, and more effective. #letsgo #fitfam #coach #cfqda #buffalove #buffalony #improvedaily #improviseadaptovercome #neversettle #pursueexcellence
%d bloggers like this: